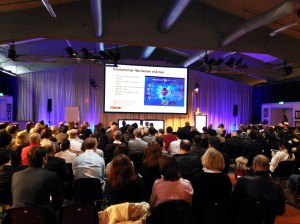 At the ESMO 2016 Congress held in Copenhagen between 7th-11th October, Dr Katja Weissel, from the Haematology and Oncology Department of Medicine at University Hospital Tuebingen (Germany), presented the results of the CASTOR study, a phase III randomised controlled study of daratumumab, bortezomib and dexamethasone (DVd) compared with bortezomib and dexamethasone (Vd) in patients with relapsed or refractory myeloma.

The phase III CASTOR study included 498 patients with relapsed or refractory multiple myeloma (RRMM) who received treatment in eight 3-week cycles. All participants received standard therapy with bortezomib subcutaneous plus dexamethasone. Then, half of the study participants also received daratumab while the other half received a placebo. The primary endpoint of the study was progression free survival (PFS). It’s worth mentioning that this is the first phase III trial in myeloma which has included minimal residual diseases as a secondary endpoint.

The results of the study show that the patients in the daratumumab arm demonstrated 61% reduction in risk for disease progression or death, a longer median time to disease progression and a higher rate of overall response (83% vs 63%). A prespecified analysis showed the PFS benefit associated with daratumumab was consistent across all selected subgroups.

Regarding side effects and adverse events, patients in the daratumumab arm experienced higher rates of thrombocythopenia (59% vs 44%), peripheral neuropathy (47% vs 38%) and diarrhoea (32% vs 22%), while the patients receiving the standard regime had a higher incidence of anaemia (32% vs 22%). Dr Weissel reported that those side effects were generally well managed during the trial setting. 7% of patients in the daratumumab arm and 9% of patients in the standard regime arm discontinued the treatment due to related adverse events.

Daratumumab is a human anti CD-38 monoclonal antibody which has shown to be effective at treating myeloma in patients whose disease has progressed despite at least two previous treatments. The European Medicines Agency (EMA) recommended granting a conditional marketing authorisation for this treatment of relapsed or refractory myeloma patients in April 2016.