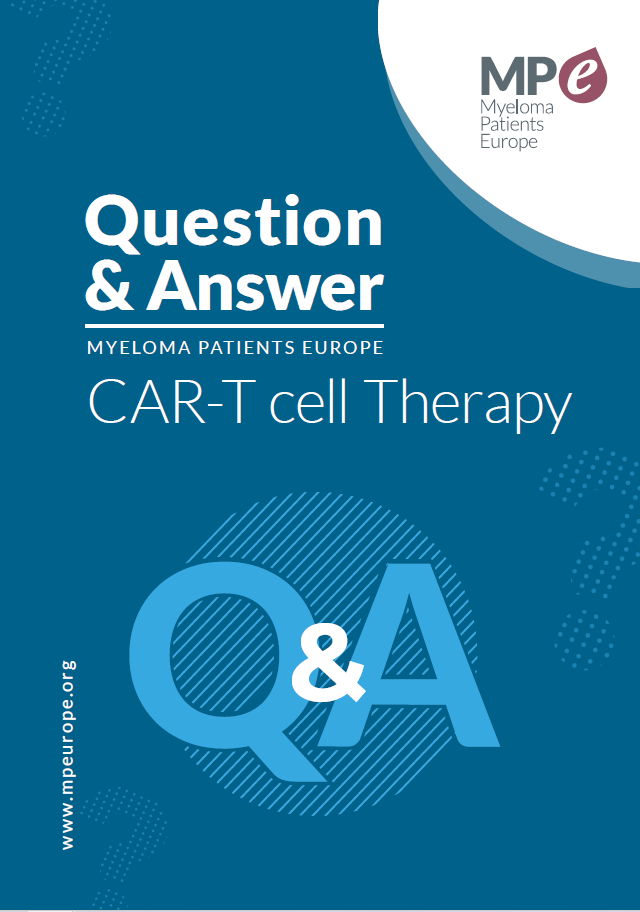 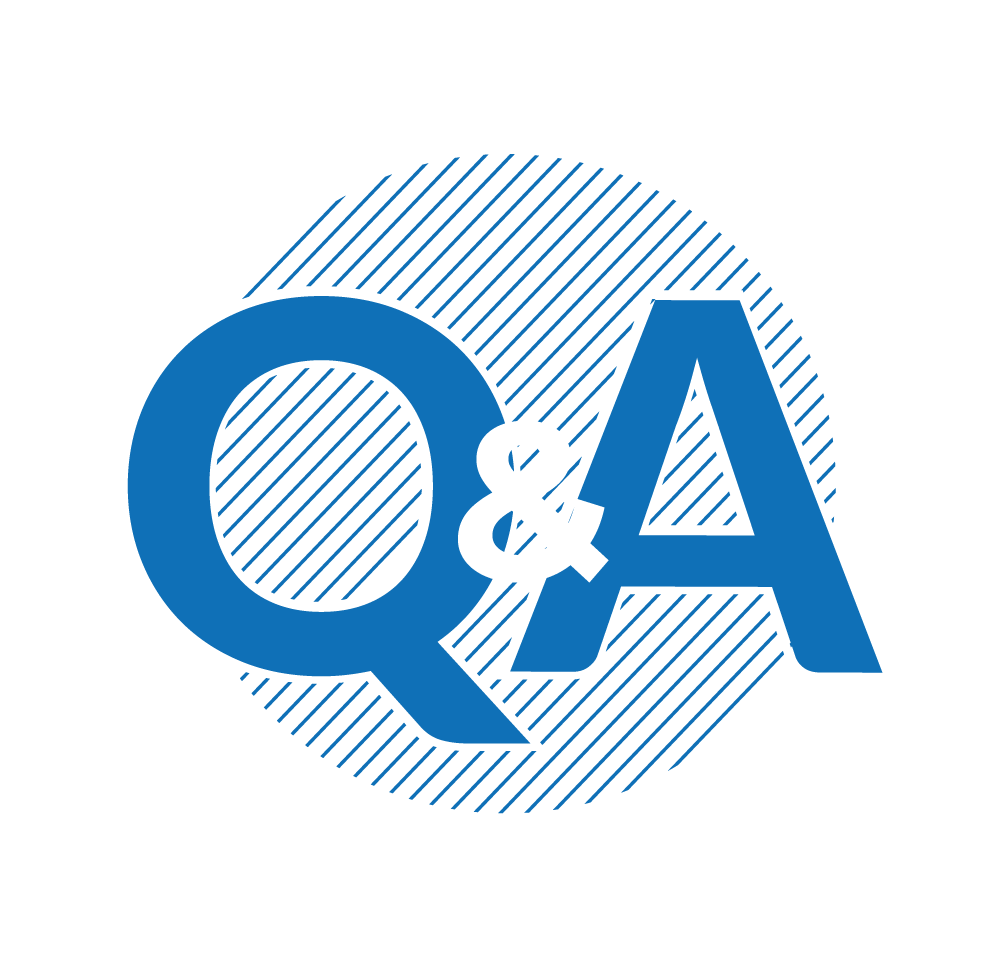 CAR-T is a form of immunotherapy currently being investigated for the treatment of myeloma. Immunotherapy drugs use the body’s immune cells to fight cancer.

This Q&A explains the following:

What is CAR-T treatment and how does it work?

CAR-T treatment uses white blood cells, which play vital roles in the body’s immune response to infection or cancer. There are various types of white blood cells, such as B cells and T cells. CAR-T therapy modifies and utilises T cells to direct them to destroy cancerous myeloma cells.

Cancer cells commonly evade the immune system, making it difficult for them to be destroyed. To enable T cells to target cancerous myeloma cells efficiently, scientists have developed a method of equipping the T cells with a protein molecule called a “chimeric antigen receptor” (CAR). CAR is a protein that resides on the surface of T cells and can instruct T cells to find, bind to and destroy cancerous myeloma cells.

How are CAR-T cells developed and/or manufactured? 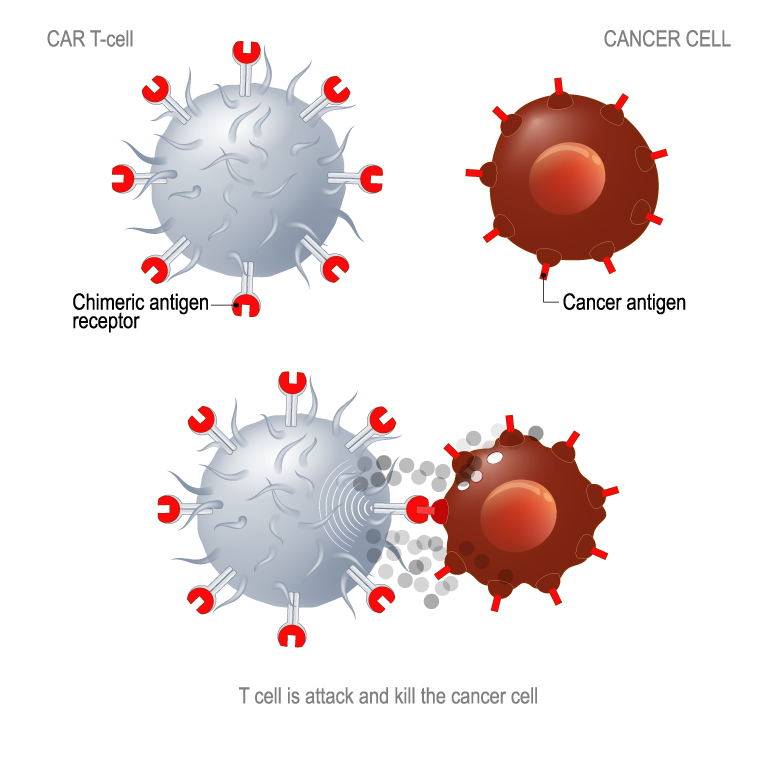 Viral vectors: Viruses have evolved to effectively transport their genetic material into the cells they infect. Hence, modified viruses are often used in gene therapy to deliver a new gene into a target cell. This gene usually codes for the desired protein to be added to the target cells; these modified viruses are also called viral vectors. Some examples of viral vectors are retroviruses (including lentivirus), adenovirus, and adeno-associated virus. These viruses are used to reprogram T cells and equip them with the chimeric antigen receptor (CAR) protein.

Sleeping Beauty transposon vector: The Sleeping Beauty system is an alternative method used to genetically modify T cells to express the CAR protein. This approach allows the reprogramming of T cells without using a virus and is thought to be a safer, less expensive and faster way to manufacture CAR-T cells.

Some CAR-T cells are equipped with a growth factor to allow for the growth and persistence of T cells in the body after infusion. Some CAR-T cells may also be programmed with an “off switch” used in situations where patients experience severe symptoms.

What is the usual procedure for CAR-T therapy? 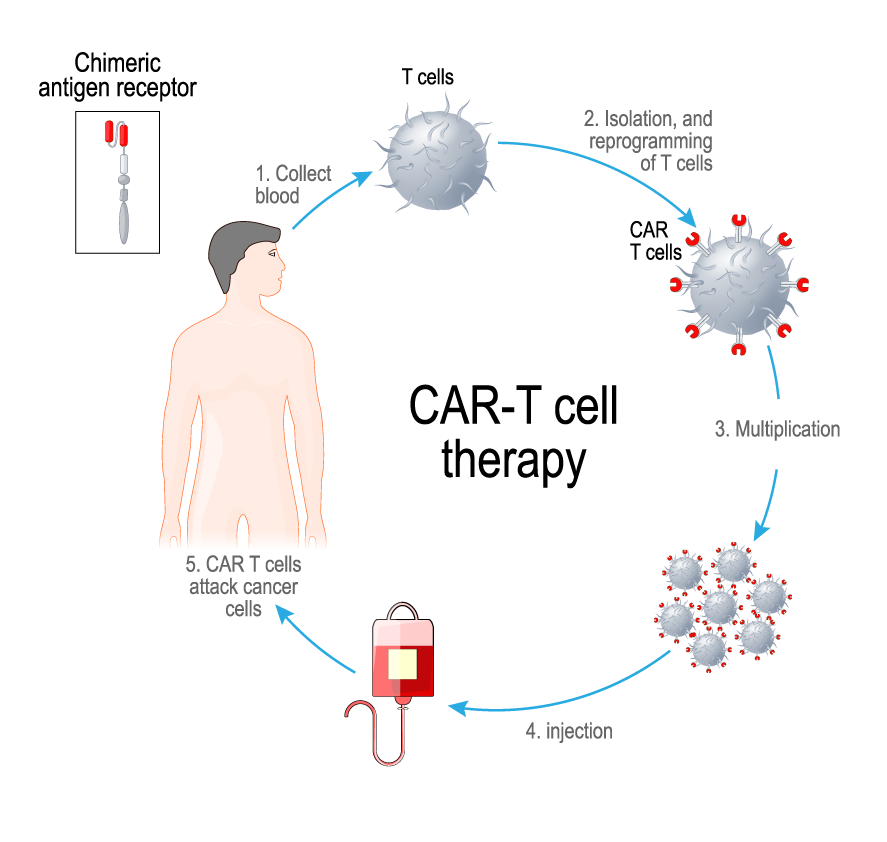 How effective is CAR-T therapy?

Patients with refractory myeloma, or those who are not responsive to traditional treatments or have been worsening while on treatment, often have poorer outcomes. Several recent CAR-T clinical trials have shown promising results where refractory myeloma patients can experience short-term remission following CAR-T (meaning a temporary disappearance of the myeloma paraprotein in the blood). However, most myeloma patients do not have disease remission lasting longer than an average of 18 months1. CAR-T therapy for myeloma is still at a relatively early stage of development; hence, significant improvements are likely to occur in the near future.

What are the main side effects of CAR-T therapy?

Neurotoxicity may appear as confusion, fatigue, headache, agitation, and in rare but severe cases, seizures.

Symptoms may differ for each patient, but if severe, they can be fatal.

Some CAR-T cells may be equipped with a safety switch, for example, an EGFRt switch. In patients who experience severe symptoms during or after treatment, EGFR antibodies are given to the patient and will activate the safety/off switch.

What are core considerations for patients thinking about participating in CAR-T therapy clinical trials?

Due to the potential severity of side effects, patients will require hospitalisation for about two weeks to receive treatment while remaining under close observation. Due to the need for close monitoring, patients should be aware that frequent hospital and/or office visits, potentially daily visits, will be required after discharge from the hospital. Also, in some cases, hospital stays may be prolonged and may require intensive care unit admission.

Enrolment in the CAR-T clinical trial does not necessarily guarantee you will receive treatment with CAR-T. Since it can take several weeks for the CAR-T therapy to be processed, patients may lose eligibility during this time. They would then be unable to receive the infusion or participate in the clinical trial.

Also, treatment with CAR-T is not entirely free of chemotherapy. Before the patient is infused with the CAR-T cells, they will receive chemotherapy (also known as lymphodepleting therapy) to reduce the level of white blood cells and help the body accept CAR-T cells.

What are core considerations for carers whose loved ones are considering participating in a CAR-T therapy clinical trial?

Carers should be aware of the possibility and potential seriousness of the side effects of CAR-T therapy and when they need to seek help. Carers should also be mindful of the potential burden of extended hospital stays, frequent office visits and the need for frequent monitoring at home. Carers should also be aware of the possibility that their loved ones may be admitted to the intensive care unit as some patients may experience severe side effects.

Is CAR-T therapy used to treat other cancers?

CAR-T therapy has demonstrated promising results in treating other blood cancers, such as chronic lymphocytic leukaemia (CLL), non-Hodgkin’s lymphoma, and B-cell acute lymphoblastic leukaemia (B-ALL)2-4. To date, targeting solid tumours has yielded fewer promising results than the treatment of haematologic cancers. Notable results were seen in clinical trials where sarcoma (bone or soft tissue cancer) and neuroblastoma (cancer of the nervous system) were treated with CAR-T5,6.

What does the data say about CAR-T for the treatment of myeloma?

There are many ongoing CAR-T clinical trials in myeloma. CAR-T for the treatment of myeloma has been shown to be effective, yet there are concerns that there is a short progression-free survival. This means patients have only a short time before their disease begins to worsen. Many of the new CAR-T drugs target the BCMA protein commonly found on the surface of cancerous myeloma cells. Data and updates on the safety and efficacy of some of these treatments were presented at the annual congress of the American Society of Haematology in December 2020. Some of the highlights are summarised below.

A phase 1b/2a trial (CARTITUDE-1 trial; NCT03548207)7 evaluating the appropriate dose, safety, and efficacy of the CAR-T drug ciltacabtagene autoleucel (cilta-cel) in 113 patients was presented at ASH 2020. These patients’ disease was relapsed/refractory, meaning their myeloma did not respond or worsened on their last treatment. Many of these patients also had previous treatment with proteasome inhibitors, immunomodulatory drugs, and anti-CD38 drugs such as daratumumab. The average number of prior lines of therapy was 6 (these patients were considered “heavily pre-treated”). As for side effects: 94.8% of patients experienced cytokine release syndrome (CRS), with 4.1% of these patients having higher grade symptoms requiring hospitalisation, and one patient died of CRS.

Furthermore, 12.4% of patients experienced neurotoxicity, and one patient died because of neurotoxicity. Of note, six patients in total died because of side effects from cilta-cel.  Other common side effects were related to low cell counts, such as low white blood cells (94.8% of patients), low red blood cells (68%), and infections such as pneumonia. Other frequent side effects were fatigue, cough, low calcium and phosphate, and diarrhoea. As for efficacy, 96.9% of patients showed response within one month after receiving cilta-cel, and at 12.4 months, no patients had worsening of their disease. The trial is still ongoing, and further survival and efficacy data are being evaluated.

Updates on a phase 1 trial (KarMMA trial; NCT02658929)8 evaluating idecabtagene vicleucel (ide-cel or bb2121) were also presented at ASH 2020. This study assessed ide-cel in a total of 62 patients who were “heavily pre-treated” and had an average of 6 previous lines of treatment. As for adverse events, 98.4% of patients required hospitalisation for side effects, with low white blood cell count being the most common (88.7% of patients). Other hematologic side effects were anaemia and low platelets. Cytokine release syndrome was observed in 75.8% of patients, with 6.5% having high-grade symptoms requiring hospitalisation. 35.5% of patients experienced neurotoxicity, with 1.6% of these patients having severe symptoms requiring hospitalisation. There were several deaths in the study, with one death from an unknown cause 51 days after receiving ide-cel. Of the 62 patients, 75.8% showed improvements in their disease after treatment with ide-cel, with 30.6% of patients showing a complete response (meaning disappearance of the myeloma paraprotein in the blood). Patients went 8.8 months without worsening of their disease, and their overall survival time was about 34.2 months. The drug is still being evaluated in multiple clinical trial phases, with further efficacy and safety data to be released in the future.

Another ongoing phase 1 study is the CARAMBA trial9, which investigates CAR-T cells targeting the SLAMF7 protein, commonly found on cancerous myeloma cells. This study uses the Sleeping Beauty method to program the CAR-T-cells and has several clinical trial sites in Europe. Data is not yet available.

Where can I find more information on CAR-T therapy and clinical trials?