What is a stem cell transplant? 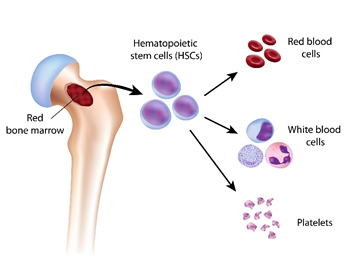 Myeloma is a rare cancer of the bone marrow. It is due to the formation of abnormal plasma cells, also called myeloma cells, which divide uncontrollably. Usually, plasma cells help the body to fight infections by making antibodies that recognise and attack germs. Myeloma affects multiple places in the body (this is why it is sometimes referred to as ‘multiple myeloma’) where bone marrow is normally active, such as the bones of the spine, pelvis, rib cage and the areas around the shoulders and hips.

Myeloma causes pain, anaemia (low red blood cells), fatigue, fractures, recurring infections, bruising and high blood calcium (hypercalcaemia). These symptoms require treatment; if the disease responds to therapy, there could be periods of time where symptoms subside and may not require any treatment. This cycle of remission and recurrence (relapse) often occurs several times. Many patients, particularly in relapse setting, will be on treatment for a long period of time to ensure that their myeloma is kept at bay.

Treatment may involve taking a combination of drugs that have been found to be more effective than single drugs. Myeloma generally cannot be cured, but survival rates are increasing in myeloma, due to the availability of new treatment and many patients are able to enjoy a good quality of life. A number of other new treatments have recently been approved or are under consideration for use following relapse, or for refractory myeloma.

What is a stem cell transplant?

The spongy tissue inside bone (bone marrow) contains stem cells. Stem cells are ‘mother’ cells which change and evolve to become other blood cells. A stem cell divides into more cells and throughout this process its ‘daughter cells’ will be differentiated into various blood cells: some of them will end up as red blood cells, others as white blood cells and others as platelets. As the bone marrow does not produce normal plasma cells in patients with myeloma, a stem cell transplant can enable the production of blood cells, including plasma cells, to resume.

Prior to receiving chemotherapy, a patient’s stem cells will be collected. This process is accomplished by puncturing a patient’s bone marrow (usually a bone on top of the patient’s hip). But it is also possible to obtain stem cells by puncturing a vein (i.e. from peripheral blood) after a special treatment, or from umbilical cord blood.

Depending on the origin of the cells, stem cells can come from the following sources:

For an autologous transplant, the myeloma patient must be in remission from the disease. To achieve that, the patient receives therapy to destroy the myeloma cells, with the medicines used depending on each case. The patient in remission then receives treatment with G-CSF (granulocyte colony stimulating factor) to stimulate the production of stem cells by the bone marrow. After 4-6 days, blood is extracted from a vein, and then stem cells are separated by a special machine and stored at a low temperature until the transplant is performed.

After that, the patient is treated with high-dose chemotherapy a few days before receiving the stem cell transplant, to eliminate all bone marrow cells. After treatment with high dose chemotherapy patients have no immune cells to defend against possible infections, therefore they will be given antibiotics and other medicines. Finally, the stored stem cells are put into the patient through a vein. The stem cells will go into the patient’s bone marrow, where they will start to divide and produce new blood cells. The bone marrow will normally produce new blood cells approximately 15 days after the transplant. 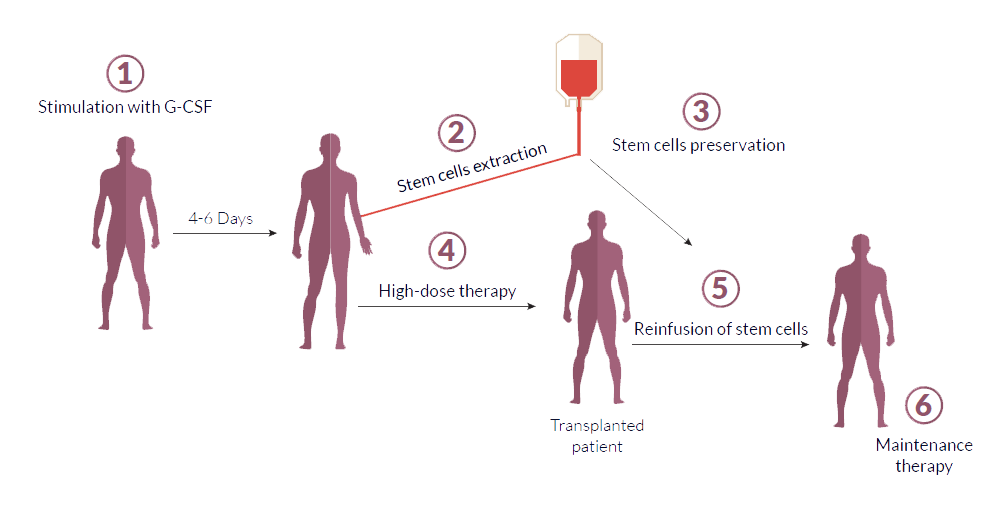 There can be side effects caused by the different medicines received at each stage of the process: before, during and after the stem cell transplant.

There is a possibility of transplant failure when no new blood cells are produced after the stem cell transplant.

There is also a possibility of infection while the patient’s immune system is weakened following chemotherapy.

Will further treatment be needed following the transplant?

After an autologous stem cell transplant, a maintenance therapy is recommended. It is usually a ‘gentle’ therapy for a prolonged period, for example with thalidomide, lenalidomide or bortezomib.

How effective is a stem cell transplant?

When stem cell transplants are successful, they are very effective and frequently patients achieve long duration of remission (disappearance of myeloma proteins in the blood). In several studies autologous stem cell transplant has been shown to increase patients’ overall survival by between 22 and 50 months.