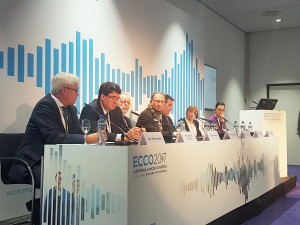 Amsterdam, The Netherlands. Cancer patients are living longer and in many cases the disease is becoming chronic rather than acute. Access to drugs that help extend life and improve quality of life, and fair prices for those drugs are therefore essential for more and more people. But patients are badly served in this respect, with delays in the availability of new treatments and incomprehensible price rises for well-established therapies, including generics, according to the data presented in the European Cancer Congress 2017.

“There is no value for patients if new cancer drugs are developed and approved but they are unable to benefit from them”, says Markus Hartmann PhD, Principal Consultant of European Consulting and Contracting in Oncology, a regulatory affairs consultancy based in Trier, Germany.

Approval decisions for cancer drugs are currently granted centrally by the European Commission, in order to ensure that risk/benefit judgments are applied on the same basis across the European Union. But decisions on reimbursement and pricing, and therefore on access to new medicines, are taken at individual EU Member State level, and this results in major differences in the overall availability as well as the time taken before patients are able to obtain new medicines, adds co-author Daniel Dröschel, Market Access Consultant at MArS Market Access & Pricing Strategy GmbH, Weil am Rhein (Germany).

The researchers studied approval processes for the 48 new cancer drugs that were evaluated between 2011-15 by the European Medicines Agency for use in the European Union. In 17 cases, approvals were based on a principal trial using overall survival as the primary endpoint; in 19 cases on trials using progression-free survival; and in 12 cases on trials – most often single-arm trials – using overall response rate as primary endpoints.

“These new drugs all show clinical benefit,” says Dr Hartmann. “Our data indicate in the overall survival group a median survival gain of 3.0 months, while in the progression-free survival group the median gain was 3.8 months. However, the trial design, trial endpoint and magnitude of effect is evaluated quite differently by the health technology assessment (HTA) authorities in the UK, France and Germany, even though they reviewed the same, or very similar, clinical data.”

These disparities in national HTA outcomes depend on a number of factors. Additionally, HTAs use different methodologies in their assessments: France, as well as the UK’s National Institute for Clinical Excellence (NICE) and the Scottish Medical Council, apply health economics that have an impact on the final reimbursement decision, whereas Germany relies purely on a benefit assessment followed by price negotiations.

“In our study, in France and Germany around 80% of decisions were positive, whereas for UK’s NICE, every third assessment ended with a negative outcome,” Dr Hartmann will say. Patients’ access to new cancer drugs in England and Wales is also hampered by later decision-making compared with Scotland, France and Germany, he adds.

In a second presentation, Dr Andrew Hill, Senior Research Fellow in the Department of Pharmacology and Therapeutics, University of Liverpool, UK, explained the congress that UK prices for cancer drugs, including generics, have recently shown a sharp rise. Between 2011 and 2016, prices for some common drugs increased by more than 1000%. At a time when the UK Cancer Drugs Fund is being re-examined because of the pressure caused by high prices, this is particularly worrying, says Dr Hill.

“We were surprised to find several companies consistently raising the prices of cancer treatment. Twenty treatments have shown rises of over 100% in the last five years, and in two – busulfan (used to treat leukaemia) and tamoxifen (breast cancer) – prices have increased by over 1000%. We have found that some companies take over the supply of some generic cancer medicines and then raise the price progressively,” Dr Hill will say.

In the UK, the Department of Health is aware of this issue and has introduced the Health Services Medical Supplies (Costs) Bill in order to be able to regulate prices in the future, he says. Companies found to be raising prices with no clear justification will be referred to the Competition and Markets Authority, and could face fines.

Paying these high prices puts undue strain on health systems, and the long-term result could be negative consequences for disease progression and survival. The researchers say that they are finding similar cases in other European countries. In Spain and Italy, failure to accept the high prices demanded for some generic treatments has led to warnings from companies that they could stop their supply. This is the case of melphalan, a myeloma drug commertialised by Aspen. Italy fined this generic company with more than 5 million euros after 1500% rises in cancer drug prises, including melphalan and chlorambucil.

“We hope that, by explaining what we have found in the UK, other European countries will take note and protect themselves against these kinds of price rises,” says Dr Hill. “At a time when cancer patients are living longer and better lives due to effective treatments, this situation is particularly worrying.”

Ms Melissa Barber, from the London School of Hygiene and Tropical Medicine, London, UK, will describe to the congress the results of her analysis of the manufacturing costs of all the medicines used to treat cancer included in the World Health Organisation’s (WHO’s) Essential Medicines List.

The results show that several key cancer treatments could be manufactured for less than one per cent of the prices charged in the US and UK. “For example, tamoxifen, used to treat breast cancer, can be manufactured for less than two US dollars per month of treatment, and imatinib, used in the treatment of chronic myeloid leukaemia, can be produced for $54 per month,” Ms Barber will say.

Costs this low could form the initial step in setting up programmes in low and middle income countries for the mass treatment of certain cancers, following the successful precedent of mass treatment for HIV and AIDS. The researchers would like to see the expansion of pilot studies for such treatments; such pilots exist already for cancer treatment in Rwanda and Haiti.

According to the data, discounts of 90 or 95% in some generic drug are rasonable and achivable. “Showing that certain cancers could be treated for very low prices could transform the future of people with these cancers in very low-income countries where there are usually few or no treatment options,” Ms Barber will conclude.

Professor Ian Banks, ECCO Board Member and chair of the Patient Advisory Committee, who was not involved with the research, commented: “Research presented at the ECCO Congress covers the whole of the cancer field, including important policy issues like those raised in these abstracts. The availability and pricing of treatments are of great interest and concern to cancer patients, and we consider it important to encourage the widest possible debate on them, as well as on other issues that affect patients’ quality of life.”