ODAC recommends not to approve panobinostat for multiple myeloma treatment

The Oncologic Drugs Advisory Committee (ODAC), a board of the US Food and Drug Administration (FDA), voted 5 to 2 against the approval recommendation of panobinostat in combination with bortezomib and dexamethasone in multiple myeloma patients who have received at least one prior therapy.

The ODAC showed its negative based in the fact that side effects were too severe to warrant approval. Novartis, the lab developing panabinostat, conducted a pivotal trial which showed that the treatment extended progression-free survival (PFS) by 3.9 months compared to placebo. However, the committee noted that the data suggests a more accurate estimate of the PFS benefit is 2.2 months – and the benefit may even be less than two months. Also 7% of patients in the panobinostat arm died from non-cancer complications compared to 3.5% in the other group. “An alarming toxicity that outweighed the drug’s benefit“, panelists said.

“First, this was a very difficult decision because I think this agent does have some activity in this disease and can be useful in this disease. I think the toxicity outweighed the marginal benefit in progression-free survival. I hope that the drug is not given up on“, James E. Liebmann, MD, ODAC panelist said after voting against the recommendation. 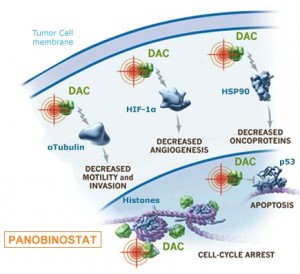 “The problem I see here, is that the therapy has a PFS benefit but there’s nothing else to hang our hat on. I think we struggle when we don’t see an overall survival benefit“, Deborah Armstrong, MD, ODAC chairperson stated.

President of Myeloma Patients Europe, Dr. Sarper Diler (M.D., PhD, CHTC), commented: “There is a huge need of drugs with new mechanisms of action such as the HDAC inhibitors like panabinostat for treating multiple myeloma patients who have received a prior treatment.

Even it is a sad new for us as patients, as we are always willing to get new treatments on the arsenal to fight myeloma, it is right that committees deeply evaluate every single drug to make sure that their benefis outweigh their risks.

But we consider that this should not be an endpoint and the FDA should provide feedback to Novartis in order to follow the proper steps to find a path for solving this safety problems and get the approval in the future, as long as it is feasible“.

Panobinostat belongs to a new class of drugs called histone deacetylase (HDAC) inhibitor. It would have been the first drug of its class to be approved for the treatment of multiple myeloma. Other HDAC inhibitors are currently under development and there is a hope that they could offer patients greater efficacy and lesser toxicity.

While next steps are yet to be defined, the ODAC recommendation will keep the approval on standby until FDA makes its final decision.